What a whirlwind week it's been! I ran a half marathon last Sunday and then hopped in the care Monday and drove back to West Virginia. I feel like I haven't stopped since I got out of the car Monday evening. Get ready for photo overload from the race. It was Stephen's first half marathon so I wanted to make sure it was documented well and took lots of pictures. 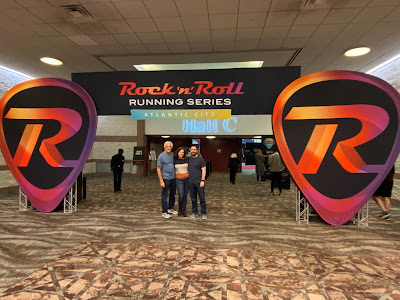 After breakfast at our favorite diner in Westfield, we hopped in the car and set off for Atlantic City where our weekend was. We drove straight to the convention center where the expo was to pick up our race bibs and packets. 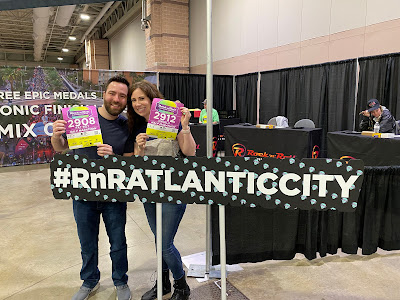 We were pumped to get our bibs. One step closer to the race! 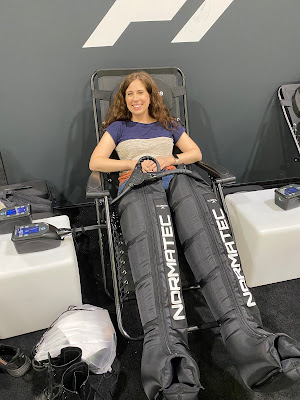 I'd never used the Normatec leg recovery system so when they had a free demo, I quickly jumped in the chair and let the compression take over. 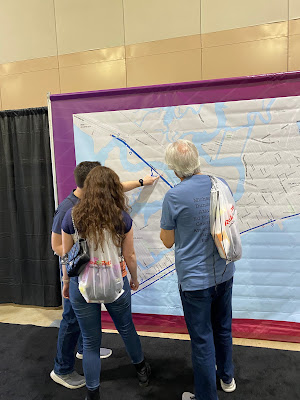 Looking over the course map to get a little bit of a bearing of where we'd be running the next day. 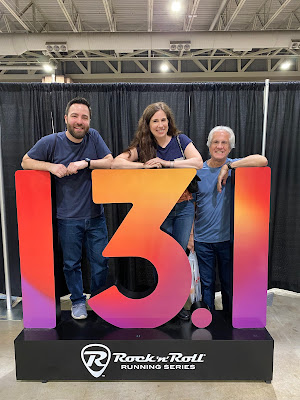 Not only is the distance of the race 13.1 miles, my lucky number is 13 so I'll take any excuse to get a picture with that number. 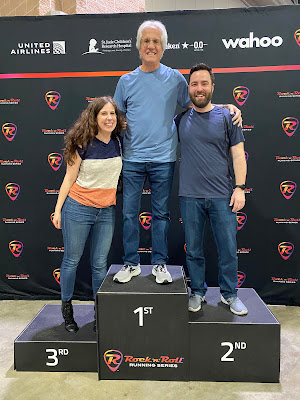 We figured this is what our times would look like for the next day. 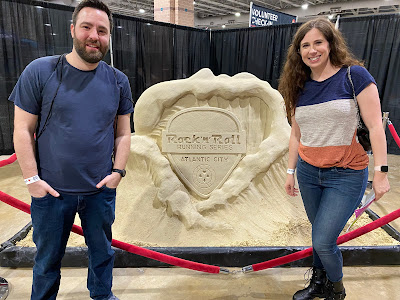 They had a cool sand sculpture of the race's logo. 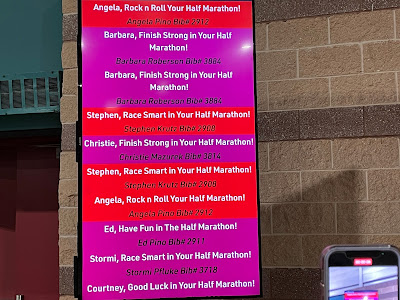 As we excited the hall, good luck messages popped up on the screen for us! I love that all three of our names are right there in a row. 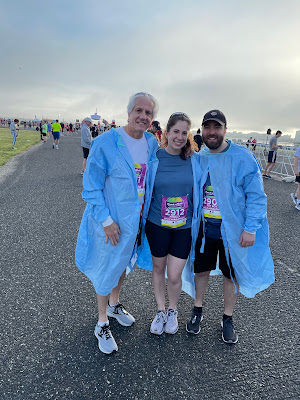 Several years ago we learned to wear surgical gowns at the start line. Not only do they keep you warm, they're waterproof for those rainy races! 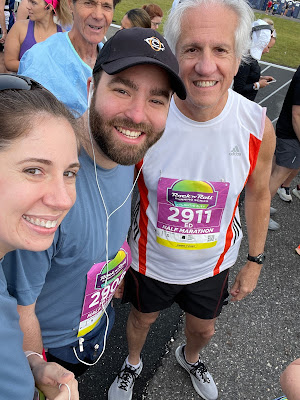 Hanging out in the corral ready to run! 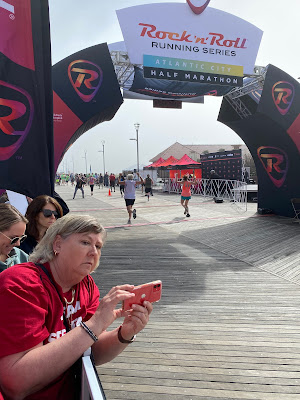 My dad was really trained for this race and since it was a flat course, he wanted to go for a personal record which he achieved! He finished the race in just under 2 hours! 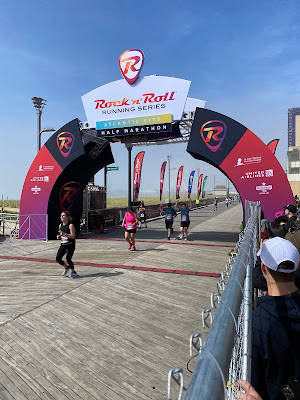 We took a little longer but were all smiles when we crossed the finish line. 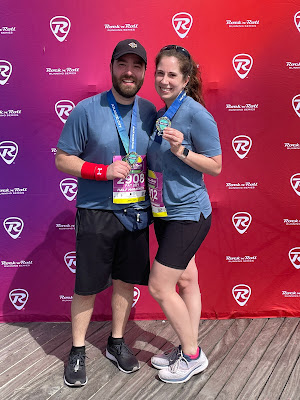 I am so proud of Stephen and how hard he trained for this race. We signed up for it back in November and since then he's put in several early mornings running on the treadmill to get ready for it. 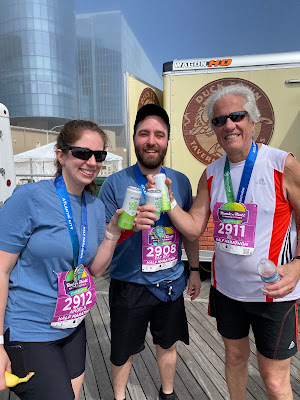 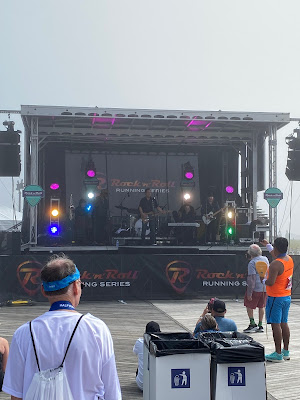 Every Rock 'n Roll Series race has a party at the end that includes a concert. Since this race was in New Jersey, the post-race concert was a tribute to Bruce Springsteen. 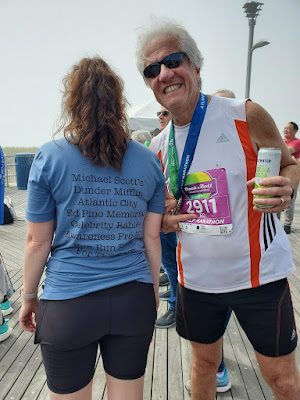 Three weeks before the race, my dad got attacked by a dog one mile into his run. After completing a 12 mile training run, he had to go to the hospital to get rabies shots. My family LOVES "The Office" so as soon as my dad told us the story, Stephen and I knew we had to make shirts a la the Dunder Mifflin Fun Run Race for the Cure. We surprised my dad with these shirts and he wore his the day before since he had already planned to wear a sleeveless shirt during the race. 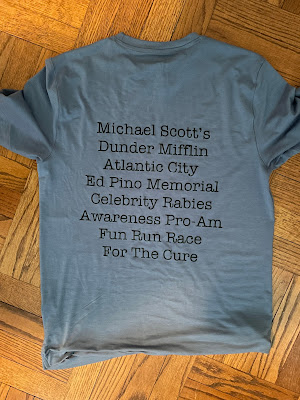 A closer look at the back of our shirts. I'm still so tickled and every time we got a compliment on our shirts, we told them Ed was running and was up ahead. I may have to update my dad's shirt just a little to say "I'm Ed" on the front of it.
Overall, it was such a fun weekend and I can't say enough how proud I am of Stephen on completing his first half marathon. We're already looking around trying to find our next race!
Have a great weekend!

Popular posts from this blog

August 05, 2022
It's Friday again and I'm linking up with Andrea and Erika for some more Friday Favorites! Remember how last week in my book review I said that I read The Summer I Turned Pretty trilogy in about three days? I followed it up by watching the series on Amazon Prime and it is definitely a favorite. The show is so sweet and seven episodes was not nearly enough for me! I'm really hoping for a second season and it can't come soon enough! This Nashville-Style Hot salad is DELICIOUS! It's the Target brand good & gather and it's my absolute favorite. It has cornbread croutons and dill flavored dried cucumbers...I'm getting hungry just describing it. Plus it has the tastiest spicy ranch dressing that really makes the salad. When I buy these, I always pick up two because I love them that much. My Cricut has been a lifesaver over the last couple of weeks. Last week I had Covid and was going stir crazy being stuck in my house. Enter my Cricut. I made SO. MANY. st
4 comments
Read more

July 28, 2022
I thought June was a good month for books, but somehow July was even better! This month saw seven books including a memoir, a YA series, some historical fiction, a beach read and suspense novel. Grab a glass of iced tea and open up your Goodreads account so you can add some of these books to your TBR list! My first read of the month was Over the Top  by Jonathan Van Ness from Queer Eye.  I was at the library looking for a different book when I saw this one and picked it up on a whim. I love the show and listened to Tan France's audiobook last year so I was excited to learn more about JVN and get some inside scoop on the show. That being said, I wasn't that impressed with the book. It mostly talks about his wild days and I do appreciate his vulnerability speaking out about mental health issues and how left untreated, it wasn't healthy -- or safe. I think I just went into the book with different expectations but that being said, I'm glad I read it. Next up was Not a Happ
2 comments
Read more

July 29, 2022
Happy Friday! I'm linking up with Andrea and Erika to share some of my favorites that have helped me get through summer so far! When e-readers came out, I fought and fought against one. Everyone who knows me knows how much I love reading and my dad insisted on getting me one for every holiday but I kept saying no. It wasn't until I traveled abroad and had limited space in my luggage that I gave in and tried one. I haven't looked back once! Ten years later and I got a new Kindle....the Paperwhite . The balcony at my apartment is finally finished and decorated so I've been sitting out on it more and knew I had a couple of beach trips planned and reading on the Kindle Fire is difficult with the glare from the sun. The Paperwhite makes reading outside so easy and the battery lasts forever! I didn't have to charge it once when I was in Mexico! I discovered this sunscreen last year and am OBSESSED! I've always known Trader Joe's was great for food but who knew
Post a Comment
Read more